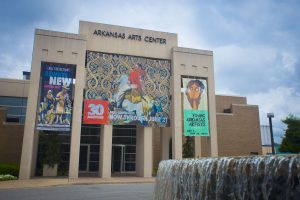 The Arkansas Arts Center (AAC), the state’s leader in international, visual and performing arts, announced on Tuesday the selection of Studio Gang as design architect for its upcoming building project.

“We had a number of highly qualified firms respond to our RFQ, and narrowing this impressive group down to the five finalists was extremely difficult,” said Todd Herman, executive director for the Arkansas Arts Center. “All five finalists were incredibly talented with international reputations and credentials. The Arts Center would have been well served by any one of them. We were in a great position to choose from such an impressive pool of talent.”

Herman said the selection committee felt Studio Gang was the best fit for the project, due to the firm’s elegant and smart approach to architecture, their understanding of the issues posed by the AAC’s current facility, their vision for the center as a cultural beacon for Central Arkansas and their commitment to sustainability and strength as urban planners.

Founded by MacArthur Fellow Jeanne Gang, Studio Gang is an award-winning architecture and urbanism practice based out of Chicago and New York. A recipient of the 2013 National Design Award, Jeanne Gang was also named the 2016 Architect of the Year by the Architectural Review and the firm was awarded the 2016 Architizer A+ award for Firm of the Year.

Studio Gang is recognized internationally for a design process that foregrounds the relationships between individuals, communities and environments. The firm has extensive knowledge in museum, theatre and artist studio spaces, with projects ranging from the Writers Theatre in Glencoe, Ill. to the Aqua Tower in Chicago to the expansion of the American Museum of Natural History in New York.

“Designing a re-envisioned Arkansas Arts Center is a truly exciting commission,” Gang said. “Its extraordinary collection, historic MacArthur Park setting, and rich mix of programs present a unique opportunity to redefine how the arts can strengthen local communities and surrounding regions. We look forward to working closely with the AAC to discover how architecture can enhance the Center’s important civic and cultural mission by creating new connections between people and the arts in Little Rock and beyond.”

An RFQ for a local architect to collaborate on the project will be issued later this month.

“When the Arkansas Arts Center project is completed, it will not just be a renovated facility, it will be a re-envisioned experience,” Little Rock Mayor Mark Stodola said. “The enhanced building will offer opportunities for an even higher level of exhibits, classes, children’s theatre productions and special events, making the Arkansas Arts Center not only a signature tourist attraction, but an even more important cultural anchor for the arts community in Little Rock.”

“It is well known that businesses looking to locate or expand look at a city’s quality of life offerings,” Stodola said. “An enhanced Arkansas Arts Center will be a showcase which will enable us to attract and retain quality job creators in a variety of sectors.”

Herman said he is looking at the project holistically, including Historic MacArthur Park, and reevaluating how the Arts Center meets the needs of its community.

“This project is about more than just addressing the physical issues of the current building. It requires rethinking how the AAC fits into the downtown fabric,” said Herman. “How can we best serve the community, and how do the AAC and MacArthur Park connect to other social and cultural nodes in downtown Little Rock? We want to do more than build; we want to transform the cultural experience.”

The five finalists presented their firm’s general project approach and design philosophies to the selection committee on November 1, 2016. The presentations took place in the AAC lower lobby lecture hall and were open for public viewing. More than 100 people were in attendance at the presentations, including students, community members and media.

A technical review panel was responsible for reviewing all proposals and recommending a slate of finalists to the selection committee, based on specialized criteria outlined in an RFQ that reflected the specific needs and goals of the AAC.

The leadership phase of a capital campaign to maximize the impact of public dollars dedicated to the project is currently underway.

“Anyone and everyone can participate in the creation of a new Arkansas Arts Center,” Herman said. “The Arts Center is a symbol of the importance that this community ­– and state – places on culture, arts education and quality of life, and all Arkansans will have the opportunity to share in that civic pride.”

ABOUT THE ARKANSAS ARTS CENTER

The Arkansas Arts Center (AAC) is the state’s premiere center for visual and performing arts, with a renowned collection of international art, serving more than half a million people each year. The collection includes paintings, sculpture and the largest U.S. repository of watercolors and drawings by 19th century artist Paul Signac. The AAC also features the award-winning Children’s Theatre, art classes and public programs. In addition, the AAC offers touring programs for communities, such as Children’s Theatre on Tour, the Artmobile and traveling exhibitions.