Sigh-Fi is a group exhibition that temporarily retrofits a typical gallery space into a user-altered infrastructure that manipulates relationships between architectural volume and contemporary art.

Science Fiction is archetypically pictured as fantastical tropes of flying cars and floating islands populating the background of futuristic and utopic/dystopic worlds. This site-specific installation and curatorial visual essay examines and questions those assertions.

The Gallery Program at UALR is excited to present artist Sondra Perry as part of this exhibition.  She recently exhibited the work included in Sigh-Fi at The Kitchen in New York City.  Her solo exhibit Resident Evil (The Kitchen, Nov. 2 – Dec. 10, 2017) received critical acclaim in the New York Times and Art Forum.

About the Curator
Haynes Riley is the curator of this exhibition.  He established Good Weather in the single-car garage of his brother’s home in a residential neighborhood in North Little Rock.  Contemporary art is the focus of good weather gallery. Riley received his MFA from Cranbrook Academy of Art.

“I wish I would have hugged them more.” Carey Roberson

Carey W. Roberson artwork integrates traditional studio media with new digital technologies and methods to create quiet personal narratives.  Roberson is currently an Associate Professor of Art at the University of Arkansas at Little Rock, where he teaches photography and digital imaging. 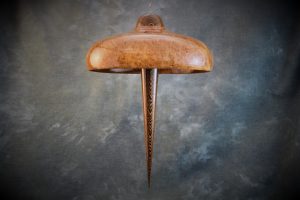 Bruce Reed’s sculptural forms in burled hardwoods are highlighted in this exhibition.  A burl is the result of tree branch gone thankfully wrong.  Reed uses shape and form to bring out the best in an accident of nature.

Bruce Reed has been a wood worker for 30 years. In 2008, he acquired a wood lathe and began exploring the possibilities of this tool.

Gallery Hours:  Monday – Friday 9am – 5pm
Saturday 10am – 1pm and Sunday 2 – 5pm
Closed University Holidays
Exhibitions are free and open to the public

Please Note – Weekend Gallery Hours have ended for this semester and will resume in January 2017.