For several years now, Little Rock-based artist V.L. Cox has pursued her expansive End Hate Series, a powerful body of work that takes many forms–principally incorporating three-dimensional pieces such as sculpture and found objects. These works address our historical relationship to anti-discrimination, Human Rights and equality as aspects of our society that remain very relevant today. This narrative series shows us where we’ve been before and why we should not go there again.

The End Hate project consists of an expansive and amorphous series of artworks, taking on different shapes and titles as it develops in separate locations and spaces. One of its most prominent reiterations was the installation shown at the Arkansas State Capitol in Little Rock and at the Lincoln Memorial in Washington D.C. in 2015. Different colored doors stood erect in a row, each with a painted sign that limited that door to only one group, such as “immigrants only” or “homeless only.” This series also includes  imagery that deals directly with racism and hate crimes, civil rights, patriotism, religion, the criminal justice system, and gun control, collectively forming a body of work that is unflinching, defiant, and at times shocking.

This work came out of a need to use art to comment on and affect change. “I noticed that the one thing a good visual does is explain things in a simple way that everyone can understand. Simple communication is a very powerful tool,” Cox said. “ I felt so strongly about fighting against blatant discrimination, that I wanted the message to be seen in the most public area available and one that belongs to ALL of us. That was when I decided on the Arkansas State Capitol and then the Lincoln Memorial where Dr. Martin Luther King made his “I have a dream” speech . . . I knew it was now my turn to step out of my comfort zone, no matter how difficult, and stand up for what was right.”

The Idle Class had the opportunity to speak with the artist about the drive to create and display this hard-hitting, impactful series that is rooted in history, politics, and the artist’s personal background in the natural state.

Cox’s long Arkansas lineage supports both her call to address political issues and drive to create artwork. “My earliest memories of creating art was when I was very young,” Cox said. “I have photos of my father teaching me to draw when I was only two or three years old.” Her father was an illustrator, and her great grandmother was a painter from Old Washington, Arkansas who graduated in 1909 with a degree in fine art from Lindenwood College for Women in St. Charles, Mo. The Historic Arkansas Museum carries work by Cox’s great grandmother and the artist herself.

Her family also has deep political roots in Arkansas. Cox’s great grandfather was a state representative from the Hope/Old Washington area in the early 1900’s, and her great-uncle ran for Lt. Governor and was appointed one of the first first judges of the Arkansas Court of Appeals in 1979. Her heritage in art and politics combine with her passionate call for justice and kindness in current affairs to create her new work. 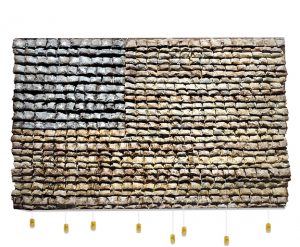 Cox believes that all artists are influenced by their locations, and she embraces her family’s Southern roots in her narrative artwork. She draws upon the rich culture and history of storytelling as a traditional form of documentation and communication. Her work is made from objects of the past, each with their own story, refashioned to communicate not only her intent as an artist, but our perceptions as viewers. “I was brought up listening to my grandparents and their stories of people and the past. I proudly continue that narrative tradition with my work not only as the visual aspect of stories, but a history lesson as well,” the artist said.

Another aspect of Cox’s past that colors her multimedia work today was her occupation as a set designer in Dallas under George San Pedro, a retired Broadway designer. She learned how to paint standing up with a paint brush attached to the end of long, thin, bamboo poles–the only way to see the large image being worked on. “I found working on projects of that scale bold and empowering,” Cox said. “I like the structural challenge of working large and the sense of freedom I feel when I remove all parameters in my design and construction.”

While Cox draws upon interests, ability, and background as an artist from the South, the End Hate series was specifically driven by the artist’s outrage at what she perceives as people not learning from the mistakes of our past. Cox says she has always been an advocate for Civil and Human Rights, but had not until recently used her art to convey this. When Arkansas’s law HB1228, known as the Religious Freedom Restoration Act, made it out of committee in early 2015, Cox was stunned. Opponents to the law, like Cox, believe that it allows for lawful discrimination against LGBTQ individuals. Cox said she then realized how quickly people willingly or unwillingly forget their history, and knew she had to take a stand.

Through display of these overtly political artworks, the artist says that she has seen the best of people, and the worst, and although she has struggled with disappointment and a feeling of dismay at the behavior of others, she feels a little better about our world.

“Change never comes easy and is always wrought with turmoil. But it’s with these difficult battles and journeys where freedom and equality are born and appreciated,” Cox said. “We tend to get complacent when things are going well in our society, but that’s when we need to be the most vigilant. I have faith in the American people that in the end, they realize we are all in this together and without each other, true freedom won’t survive.”

Second Life: Local Designers Look for the Old to Create the New

Fenix and Friends at Walker-Stone: Art, Literature, Performance in April