On April 23rd local music lovers had the pleasure of catching Banzai Florists’ return to the stage after a two year hiatus from performing. Fayetteville’s most unique indie artist, Banzai Florist tore up local DIY Swamp House in a killer revamp show. Bringing in the largest crowd seen at this venue, Banzai’ rocked the minds and ears of the young crowd eager to hear their dreamy pop music. Banzai’s wide variety of experience and exposure brings a completely new genre of city pop to Fayetteville’s music scene. After their performance, Banzai gave us insight into the extremely creative and somewhat controversial mind of Banzai Florist, Harry Glaeser.

The composition and production of the group can mainly be attributed to Glaeser, however at The Swamp House he was joined by his steady piano, John Ostenmeuler, bassist Bobby Missile. Previously, Harry, John and Bobby have played with shows in town at previous venues such as Backspace.

After the group not playing for just over two years, the experience he described at Swamp House was “Just crazy, these songs that probably haven’t been heard are these super archaic runes of who I am as a musician and recording artist. Getting these dudes to play with me infront of a bunch of random people, just feels really weird, almost like opening a really sentimental scrapbook or photo journal in a room of fucking strangers that dont really get how deep you consider it to be, but, none the less can enjoy it.”

His performance at Swamp House was a collection of scattered little pieces of Banzai over the course of the last few years. Bringing back songs from his first LP that Glaeser produced himself, as well as playing songs he made last year during COVID. He says “all of these songs have their own stories and different epochs, it’s like having this weird anachronistic playlist of random shit that I just pooped out throughout being a guy going to college and getting a college degree, and having a job, and living in different places.”

The only constant thing within his life and creations, he says, is the fact that he may or may not write a song that day. Within his extremely talented mind, there are hundreds of songs that no one will ever hear, and “picking eight of them to play for random strangers to hear is a deeply sentimental task,” said Glaeser.

Seeing as it was two years from their last performance, he describes his desire to play something new that they may not have played prior to Covid. The set list performed at Swamp House featured new and unheard songs as well as Banzai’s top playing tracks on Spotify. Those who attended Swamp got to hear Get Back Baby, Pop, Nori, Death in Drag, Love Me Back Clairo, and last but not least, Real Life- which has 1.9 million listens on Spotify.

Real Life, according to Glaeser, randomly blew up in 2019. It started out as a demo he released that got a couple thousand listens every few days- which then turned to many thousand listens every single day. Another major high point of Banzai Florist’s career was when Glaeser was contacted by a Sync Representative from Hulu’s hit show, Shrill. He was approached by someone who wanted to use his song Love Me Back, Clairo, on the soundtrack. He recognizes the opportunity to be featured in a hit TV show due to recent placement of independent unsigned artists who are finally getting representation in the media.

Back in 2018, Banzai released their first and only LP that was produced in two weeks and played by Glaeser, called Nazz. Since the first LP, Banzai has released 14 singles that have been worked on by other artists located all around the world in places like Boston, LA, Brooklyn and Paris. Glaeser has experience working on producing, mixing and mastering his own music as well as other local and nonlocal artist’s work.

Gaining his experiences through music school at University of Arkansas in Conway, he describes his introduction to music production as “not the right way.” After attending UCA as a composition major, Glaeser very quickly realized that you won’t learn how to write music at music school. After he dropped out, he moved to Little Rock with his then band, Couch Jackets, where he recorded his first LP and gained most of his music recording experience during his own exploration.

The talented and well versed Glaeser brings his “complicated relationship” with music into fruition through a blend of his inspirations and influences. Glaeser’s distinctive outlook on music is one of the most fascinating expressions.

It is commonly known that many artists struggle with over criticizing their own work, as it can be inevitable when putting pieces of yourself into your work. Glaeser openly states his dislike for music, he says “I don’t like music, it’s cringe.”

When asked how he would describe his music to someone who had never heard it, his almost immediate response was “Not good, not worth listening to.” It’s not that Glaeser actually dislikes his music, it’s more like a struggle of the deep processes of a musician’s mind.

Glaeser describes his sometimes unfortunate experience of feeling “forced into a corner of not being able to enjoy it,” he said “It’s a vicious cycle of dissecting music for all of its stray parts.” He discussed the aspects of a classically trained musician that tends to over analyze every aspect of a musical piece.

His musical experience through institutions aided in his perspective of music as “pessimistic or skeptic.” He says, “You’ve been obsessed with it your whole life, it just gets old. Maybe I don’t enjoy it, I’m not in love with the way I feel while listening to it, or I almost feel like I analyze the song instead of sitting and enjoying it.”

Dealing with the struggles of an over-analyzer, Glaeser finds some relief and enjoyment outside of the realm of pop with independent genres full of classical artists that do bring emotion to his life. Nostalgia plays a big role in his ability to feel music without seeing it for its parts. That includes bands like The Beatles or artists like Chet Baker with genres of Jazz and Dusty Swing. “It sucks that I have to have a complicated relationship with music, it’s just how it is for some reason” he said.

When Glaeser creates, he does his best to compose with intention of things that excite him, even if he’s making only for the sake of himself or others. Glaeser mentions his admiration for working with others because it fosters a sense of play. As a well trained musician the pressure to create is heavily placed upon himself. “That’s why I like working with other people because when I work by myself the pressure is always like ‘make something good Harry, dont fuck this up’ but when you’re playing with someone- it’s like reverting back to a childhood state,” Glaeser said.

One particularly interesting and potentially controversial topic was his belief in the non originality of music. “I think everyone should rip off other people. I don’t see why anyone would be too protective of the thing they made,” he said. His realistic and unapologetic outlook is that there is absolutely nothing different between being inspired by another artist’s work and using it for your own creations.

“We’re in a late stage of capitalism where pretty much everything has been done and people are just faded to regurgitated old forms…If Kanye West and Kid Cudi could put a trap beat over a Louis Prima song, and rap over it, most people would probably unanimously say that it was inspiration driven, rather than just ripping off. I just don’t think that there is even a blurred line,” he says.

Accepting the facts of his intricate connection to the music world, Glaeser describes the many emotions associated with his passions. “Maybe not envy, maybe just skepticism, because it’s hard to listen to a song in this musical paradigm and not feel like you’ve heard it before,” he says. In his recent disillusionment with music, “originality is cool, new is rare, but it is all contextual,” he says.

Although he struggles with these contradicting feelings, Glaeser continues to push through and pursue the aspects of music that he enjoys. Having the outlook that an artist must create something novel each time they make something is unproductive in his eyes.

“I love to sit down and say I’m going to make something really bad- that’s a whole ass great exercise, because sometimes you make something good. I think that’s what makes artists like Mac DeMarco so great, because they obviously don’t take themselves too seriously,” he says “It’s very much being goofy, and that’s what you get- when you buy the record, you’re buying a goofy little thing I decided to make.”

Glaeser’s opinions and perspective on his own experiences within the musical community fostered an eye opening dialogue that sparked an eye opening insight into the life of a 21st century artist. For those looking to dive deep in the dark web of Banzai Florist, you can find their music on Spotify, Soundcloud, YouTube and their bandcamp website.

Making a Place a Home: A look at art and the impact of place 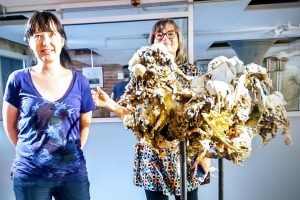 Making a Place a Home: A look at art and the impact of place