As part of The Writers’ Colony at Dairy Hollow (WCDH) 20th Anniversary Celebration, the colony has awarded its first scholarship since establishing a needs-based scholarship fund in November 2019 as part of the WCDH 20th Anniversary Celebration. The awardee, Syrian director and creator, Kholoud Sawaf, is working on the adaptation of Arabic poetry into a stage presentation to tell the story of a refugee through poetry and movement. As the project has not yet been funded, Kholoud inquired about financial assistance for a residency.

“It was a privilege to be able to bring Kholoud back to the Writers’ Colony for another residency,” says Michelle Hannon, The Writers’ Colony executive director. “We are grateful for the outpouring of financial support we are receiving for the scholarship fund and for the opportunity to offer another way to support emerging writers.”

Sawaf first stayed at The Writers’ Colony in September 2018 when she was working on the original play, 10,000 Balconies, loosely based on Romeo and Juliet and set in contemporary Damascus, Syria. 10,000 Balconies premiered in August 2019 at TheatreSquared to sold-out audiences. Doris Duke Foundation for Islamic Art funded her initial residency at The Writers’ Colony.

Sawaf called her recent residency at The Writers’ Colony, “a game-changer,” according to a press release.

“It was a major step in giving the project its final breath and voice,” Sawaf says.

When asked why a residency was important to her writing, she said, “The colony is designed to enhance artists’ creativity and allow them to do their best work. The suites are perfectly created for comfort with a fantastic space for writing. Offering meals, cooked by the amazing chef, Jana [Jones], allows writers to focus on the work and not worry about shopping, cooking, and cleaning.” She continued, “My residency was perfect all around, and I will hold my time at the colony dearly forever.”

Sawaf was born and raised in Damascus, Syria and holds an Master of Fine Arts degree in directing from the University of Arkansas. She trained and worked in theater and television in Syria, Lebanon, the United Arab Emirates, Qatar, and the United States. She is a recipient of the Classical Directing Fellowship from the Drama League in New York where she collaborated with Tina Packer at Shakespeare and Company. She was the Assistant Director of Vietgone under the direction of May Adrales at the Manhattan Theatre Club (as a Jonathan Alper Directing Fellow) and at Oregon Shakespeare Festival (as part of the FAIR Program).

Sawaf’s upcoming projects include directing an educational tour of Much Ado About Nothing with the Hudson Valley Shakespeare Festival and collaborating on a new piece with award-winning playwright/director, Joe Calarco, and Syrian actor and educator, Mohamad Al Rifaie. She was invited to participate in an elite cadre of global artists as part of the National Directing Institute with Pangea World Theatre and Art2Action and serves as an associate member of the Stage Directors and Choreographers Society (SDC). She is a proud member and presenter at the Nhna Cultural Club in Damascus, Syria, which provides an artistic, educational, and cultural exchange between Syrian artists.

The WCDH scholarship fund was developed to assist writers who require financial support to benefit from a writing residency at the Colony. Scholarships are awarded on an as-needed basis depending on availability. Equity Bank of Eureka Springs, Arkansas, generously provided the initial Scholarship Fund donation. Contributions made to the WCDH 2019 Giving Tuesday drive continued to grow the fund, as well as writers in residence who contribute over their subsidized room rate to enable other writers to experience the gift of uninterrupted residency time at The Writers’ Colony. For information on how to contribute to the WCDH scholarship fund, please visit writerscolony.org/give-to-wcdh-scholarship-fund. 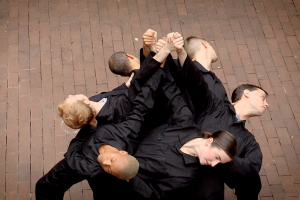 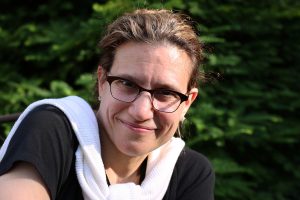 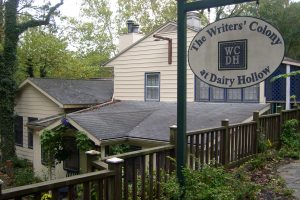