Lee Wyatt has a lot of willpower. His singular determination has allowed him to go from novice to expert in no time, such as with his recently accrued love of rock climbing and slack lining. However, painting and photography have long been Wyatt’s true passions and he has spent years perfecting his craft. Inspired by his father Gary, Wyatt ventured down the artist’s path as an adolescent after realizing that his early dream of being an architect had been derailed due to his disdain for arithmetic. In high school, he became interested in tattoo design and street art before getting serious about photography.

“I got into stencil graffiti as an excuse to use some airbrush equipment I had laying around that I had purchased for a project that never got completed,” he said. “When I realized I could design stencils based off my own photos that were more detailed and intricate in nature than typical graffiti, I got hooked pretty quickly. Ever since then, it’s basically been a pursuit to see how complex I can make my designs.”

Wyatt has always searched for ways to combine his favorite mediums in unique ways. While he had some early experiences tagging and committing various paint-related misdemeanors, he turned to using his stencils on canvas, a common evolution for graffiti artists. While freehand painting opens artists up to more room for error, stencils can be very constrictive, especially for a stickler like Wyatt. 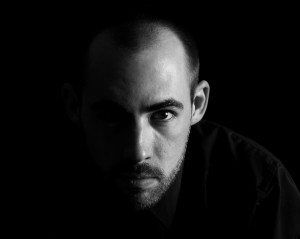 “Stencil graffiti has been a tough medium to work in since I can be kind of a perfectionist with my art and have a slight sense of OCD,” he said. “When I initially got into it, I struggled to find the absolute perfect way to paint stencils without overspray or flaws, then it became about finding ways to cut more intricate designs without killing my hands. Neither of those things is entirely possible, of course, so it’s an endless battle.”

Each step is carefully controlled for Wyatt’s art. He begins by shooting his subject, keeping his eye on the photographic composition, particularly the balance between light and shadow, while holding out hope that one of the shots could yield a great stencil design.

“Occasionally, I’ll go into a shoot with the specific intent of capturing an image I see in my head, or aiming for a particular design,” he said. “But most of the time, I just focus on the photography first and see what comes out in the end. I approach a lot of shoots with no idea what I want to do, and figure it out by goofing off and bouncing ideas around with the model I’m working with.”

His favorite subject is the female form, especially the nude variety.

“I think the female form is a work of art in and of itself, and a fantastic place to start any project from,” he said. “I like to think that my work is half done the minute I find the right model for the right project. Not all of my work is focused specifically on nudity, though, so much as the implication or suggestion of nudity. I like to hide exposed portions of a models body more than to show them, typically, whether through the use of shadows or posing.”

Approaching a model for a nude shoot can be awkward to say the least; however, Wyatt has found a supportive network of female friends who have been supportive and participative. The nudity was implied during his first shoot years ago and he’s since adapted his recruitment methods.

“In the beginning, it was a little weird since I didn’t have any kind of reputation or portfolio to back up my ideas,” he said. “But in recent years, it’s become a much more smooth process, with me being able to better explain my ideas to others and my portfolio showing those who don’t know me well that I’m actually (mostly) serious about what I do.”

For Wyatt, the future is wide open for his art.

“I’m always meeting interesting new people to collaborate with, coming up with new ideas for projects in the styles I’m already working in, and I definitely want to get more detailed and complex with all of my work,” he said. “But overall, I don’t really have any idea where I’m likely to head next. As long as it’s something new, I’ll be happy.”

To see more of Wyatt’s work, visit his website.