The minds behind The Unexpected have announced the official lineup for this year’s festival, will return for its fifth year to Fort Smith on October 7-12.

This year’s artistic lineup, curated by global creative house Justkids, includes legendary Spanish artist and muralist Okuda San Miguel, who will return for his second installment at The Unexpected. San Miguel joined The Unexpected in 2016, completing the iconic “Universal Chapel” wrap-around mural at the Rogers and Garrison Avenue intersection, now Gateway Park, according to a press release. This year, San Miguel will complete a 360-degree installation at a home at 1319 G St. in his distinctive style–colorful geometric patterns that portray animals, regional iconography and human figures, according to a press release. 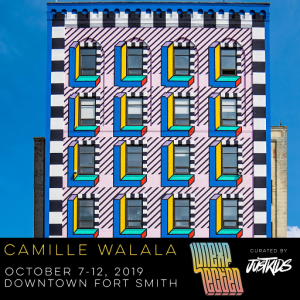 Three blocks southwest of San Miguel’s work, London-based artist Camille Walala will celebrate their first The Unexpected visit with an entire service-station takeover. The station will be completed in her “trademark tribal pop style, bringing bold and playful graphic patterns and colors to the intersection at Grand Avenue and 11th street,” transforming an everyday location into an artistic view, according to a press release.

In west downtown Fort Smith, the Bakery District will host Hilda “Poni” Palafox, who hails from Mexico City. She will complete a two-part mural on the Bakery Silos–her style will bring a gentle femininity in her compositional balance of forms and colors, according to a press release.

Adding to the eclectic scope of the lineup is Scottish born, London-based poet, artist and sculptor Robert Montgomery. Known for his site-specific 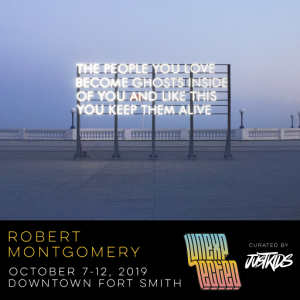 installations created from light and text, Montgomery will bring an original light poem to Towson Avenue, adding to an already impressive gallery of mural art added in last year’s festivities.

French visual and performance artist Alexandre Bavard will join The Unexpected crowd, delivering an adaptation of his performative piece BULKY, never before see in the U.S., according to a press release. The performance piece (choreographed by Alexandre Bavard) features his original music and reinterprets the tag gestures through a collaborative dance system, interrogating the limitations of street art exposed in galleries and institutional space, according to a press release.

Finally, Fort Smith composer Amos Cochran will present Memory Dissolve, an immersive experience that plays on the effects memories have on us and the idea that humans can omit bad ones, even momentarily, through art. Bastion Gallery will be “transformed into a space filled with music, light, repetitive rhythmic patterns, taking the audience through a series of emotions and ideas culminating in a the dissolution of music notes,” according to a press release.

Additional activities, curated by The Unexpected, include:

The Unexpected will open its quintessential headquarters shop on the first floor of the Propak Headquarters at 1100 Garrison Ave.