“James has been working on this body of work for over four years and we are thrilled to host the first showing of his Manscapes series,” gallery owner Mac Murphy said.

The show opening will be April 1, 2016 from 6-9 p.m., and will feature large paintings on canvas, smaller works on paper as well as some limited edition prints to allow works to fit the seasoned collectors and those seeking to start a collection. This series is deeply personal to James, and he has devoted several years to building this body of work.

“The Manscapes are my Frankenstein monsters,” James said.  “They are constructed of parts torn from the depths of my psyche and stitched together with paint and sweat. They stand on their own ready to face the world on their own terms.”

“What is our purpose? Is purpose itself a hollow construct?” James goes on to explain.  “We are dominated at every turn by the artificial and increasingly empty.  The Manscapes are my way of wrestling the concrete beast.  It helps to maintain humor, perspective and a sense that we might just evolve our way out of this mess.”

James was born and raised in upstate New York.  His artistic roots are in the East Village New York City scene of the 1980s.

“I mingled with the great and the obscure and found a wealth of riches in all corners,” he said.

He painted backgrounds for David Salle, worked in Robert Longo’s studio, made set pieces for the late, great Gretchen Bender, and has shown his work in New York, Paris and the Netherlands.  He now lives and paints in his studio in Little Rock.  He has also been featured in five Delta Exhibitions and has been the recipient of an Arts Council grant.

“He is one of Little Rock’s most prolific artists with a voice that resonates in the moment yet transcends time,” local art collector Joe Johnson said. 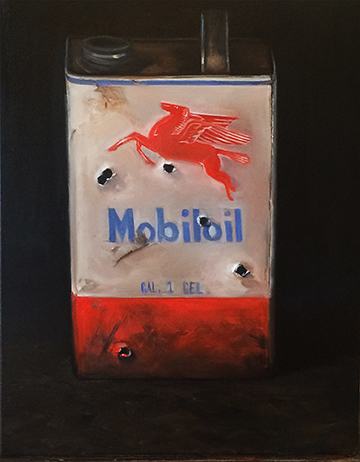 WELCOME TO THE SHOW: DRAWL Southern Contemporary Art to host "The Gun Show" with The Oxford American