Joshua Robert Long has been in the daily poetry grind for several years.  A graduate of Ohio State University, Long is the author of numerous books and chapbooks including: Translating The Avenues, Mixtape Volume I & II (with Justin David Koontz), Leaving Frost Upon the Walls, and HARPOON. His work has appeared in numerous publications over the years including Spork Press, Over The CounterCulture Magazine, Burning Word, The Hog Creek Review, The Journal @ OSU, and many more. He has twice won The Arbuckle Writing Prize for excellence in the field of poetry. Currently, he is working on a new collection entitled Wallbanger, which The Idle Class has previewed this week.  Recently we chatted with long about poetry and the struggles of a working poet. 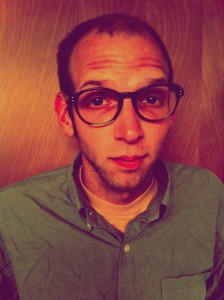 THE IDLE CLASS:  How did you get into poetry?

JOSHUA:  I got into poetry when I was a teenager. I think around the age of 15 or 16. My sister had this copy of Lawrence Ferlinghetti’s A Coney Island of the Mind. I was intrigued by the cover so I read through some of them. I wasn’t in a position to fully understand what he was going on about, but something about it stuck with me. So I started poking around some of her other books and found some other stuff I was drawn to. Guys like Gregory Corso and Charles Bukowski. I liked the way many of their poems told a story, but they weren’t like a novel, they felt more like thoughts.

When I would get bored I would write some of my own (around that time). Most of them are garbage if I think back to them. I was too young to know what I was actually saying, or trying to say.  But that was what pushed me through the door, in appreciating it, and wanting to understand it anyhow.

THE IDLE CLASS:  I see that you stick to that storytelling aesthetic.  Have you experimented with other forms?

JOSHUA:  I have experimented with other forms, in different writing classes that I’ve taken. When I try to do it on my own time, it always seems to stray its way back to what I do naturally. I think the furthest I ever got away from myself was when I made the book Leaving Frost Upon the Walls. That book, which is a poem that is roughly 37-38 pages long, sort of merged my common observations with a sort of vague abstract sense of being.

Basically, when it comes down to it, I’m not opposed to evolving stylistically, it’s just that I’ve found what I’m good at, and what works for me, and I’m kind of stuck with it, for the time being at least.

THE IDLE CLASS:  You’re good at telling a story by letting your voice come through in the details. What do you think goes into creating a good poem?

JOSHUA:  From my experience, and thinking about classes in college and all that, where they were apparently trying to “teach” us what to do, I’ve learned that honesty works better than pretending. If you haven’t gone through the experience that you’re trying to write about, you probably shouldn’t be writing about it. The biggest thing I’ve learned personally…is that you don’t have to wrap things up by the end of the poem. I think that was one of my biggest problems years back. I’ve learned it’s okay to let things kind of linger and not resolve. It’s not a story after all.

THE IDLE CLASS:  You’ve been quite active over the last few years getting published in journals, winning awards, publishing your own work.  How devoted have you been to your craft?  How do you balance creativity with getting things out there?

JOSHUA:  I spent a lot of my late teens and early twenties playing guitar and drums and things in bands. I apply that sort of schedule to my writing.  I work in what I call small little “sessions”. I open a pad and write until it feels “forced”, then I stop and call it a day for a while until something gets me moving again.  On my computer, I must have a thousand little “sessions” saved.  It’s sort of how my friends and I would do it when we played music. we would work on songs in little clusters and just keep recording and recording them until satisfied.

THE IDLE CLASS:  I’ve found that a lot of musicians and creative types tend to focus solely on the creative side.  How do you go about getting your work out there?

JOSHUA:  Basically I work for a while, like these past two months I’ve sort of laid low and thrown some stuff around. I have a little list of places I’ve accumulated over the years. I just send them little clusters of poems until something bites.  Like last March I remember sending out over a hundred poems, only about 10 places bit on to them. But that’s a fair turnaround when you consider the poetry world is a tiny place with particular interests.

THE IDLE CLASS:  We connected on Facebook. You’ve got a blog.  How important has social media been for you in getting your work out there?

JOSHUA:  Social media has been insane. I’m still adjusting to it to be completely honest with you. I started my website (joshuarobertlong.com) sometime early in 2012. I used Tumblr to host it because it was free (I’m a cheap bastard). About 5 months later there are roughly 3,800 people following me.

People write me messages on there and on Facebook all the time telling me how much my poetry has helped them. It’s all very overwhelming. But to get back to the question, social media has been very important. I’ve had more success in this past year because of social media than I have in the previous 3 years of trying to get my writing out there the old-fashioned way.

THE IDLE CLASS:  Any tips for writers on social media?

JOSHUA:  As far as social media goes, what I have learned is consistency matters. They like to hear from you often.  I guess it’s one of those be yourself sort of things. Don’t overwhelm people. I’ve learned that lesson. They don’t want to be reminded of you every 30 seconds.

THE IDLE CLASS:  Let’s talk about your published work.  Tell me about your first collection and how that came about.

JOSHUA:  My first book was called Translating The Avenues. It consisted of five little sections that at the last minute I decided just to lump together into one thing (more bang for your buck I guess?).  Originally I just worked on the original part of it, a section called “Speaking Languages Sidewalks Understand.”  But I got all the poem from it finely tuned, never thinking they would be in a book together, or in a book period, but then I got bored, and I was left alone because my girlfriend went on a vacation with her mother.  I spent that 12 days re-reading them and realizing that the entire collection was a pretty good set.

THE IDLE CLASS:  Did you self-publish?

JOSHUA:  Translating came out through Walleyed Press, an organization I play a role in, or used to.  They use POD services to undercut costs on things. Their biggest role is doing Internet chapbooks. HURRAY TO THE DIGITAL AGE.

THE IDLE CLASS:  Have you worked with them on all of your collections?

JOSHUA:  I did the first one (Translating The Avenues), and Mixtape I & II with them (both of which were co-authored by Justin David Koontz). Leaving Frost Upon the Walls was full on self-published and my latest, HARPOON, was put out on behalf of a collective I started called The Polkadodge Organization. 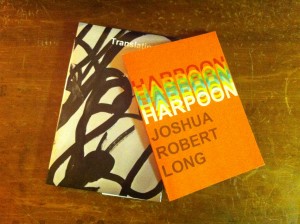 THE IDLE CLASS:  So how have you gone about marketing them?

JOSHUA:  Marketing has been kind of interesting. More or less I rely on the following I am building slowly, or have been building slowly. I get a lot of traffic to my website, I get a ton of traffic to polkadodge.org, and I’ve gotten a lot of notoriety from my awards and publications in other journals and magazines.  I’ve basically come to understand the reality that the world doesn’t care about poetry. It’s not a moneymaking game. But that’s just fine. I could give a fuck about money. I care about the art of it. It’s a beautiful thing. There’s life in it. It’s hard to find life in anything.

THE IDLE CLASS:  How has your work changed with each poetry collection?

JOSHUA:  It’s changed a lot in my opinion. Like I sort of said earlier, Leaving Frost Upon the Walls was a sort of “new beginning” or something along those lines. From that point on, I began telling stories like usual, but the stories became more surreal and dreamlike…more vague and abstract. That’s become the new normal. And, I’m completely happy about that. There is nothing else I’ve done that has made me as proud as Leaving Frost Upon the Walls.  The fact that Spork Press published the first half of it while I was unsure of it made me realize I was onto something.  It’s a beautiful new direction.

THE IDLE CLASS:  Tell me more about Wallbanger. How did it come about and why did it get shelved?

JOSHUA:  I was in this Psychology class years back in college. It was a class about drugs and how they work on the brain. Somewhere in that class we began talking about the 1940s-50s and the drugs that housewives used to use out of boredom whilst their husbands were at work.  The term “Wallbanger” came up and I fell in love with the term.

Some time after that I began working on a collection of poems, ones I had high hopes for so I called it Wallbanger.  As it turned out though, the poems weren’t that good.  I tried revising them and so on, and nothing about them seemed to stick.  So a few weeks back something brought the term “wallbanger” back into my brain, and I decided to start over fresh with the Wallbanger concept.  So far, so good.

THE IDLE CLASS:  Congrats.  How many poems are you looking at for the final draft?

JOSHUA:  Probably about 40-50. I’m roughly halfway there, or at least that is how it feels.

THE IDLE CLASS:  Can people purchase your collections on your site?

JOSHUA:  Yep, there’s a Books section, and they’re all there and for sale. Occasionally I throw a chapbook on my site as well. I don’t think there is one floating around at the moment.

THE IDLE CLASS: One last question…what poets are you reading these days?

JOSHUA:  I keep Diane di Prima by my bed.  I have some kind of crush on her I am yet to understand.  But lately, I’ve been reading a little bit of Lunch Poems by Frank O’Hara and Ginsberg’s Kaddish.

More information can be found about Joshua by visiting his website where he regularly blogs about his upcoming projects, as well as shares photographs and news from both his day-to-day life and career in the literary field.  You can follow him on Facebook as well.