Greg Zeck’s release of Transitions, Early Poems, 1979-1989 marks his first published collection of poetry. The publication through Dead White Man Press is available for purchase on Amazon here. The collection is a coming-of-age series centering around love, lust, loss, and the human experience. Zeck said these poems were the culmination of feeling lost and disappointed in his early life where nothing had gone the way he’d expected.

“Think of the most disappointing thing in your early life, whether that occurred in career or love or family. Think of your early feelings of certitude, or magnitude, even omnipotence,” he said, “and then how these feelings came crashing down and left you, well, on your own. And on your own you took up your pen, that feeble instrument that you could employ against all odds.”

He said his older, wiser artist self might’ve told his younger counterpart to immerse himself in the flow of life including all its joys and sufferings.

Though Zeck is now retired, he published this collection of 50 poems because he finds no reason to wait.

“My older brother Gerry, who died of brain cancer four years ago, regretted that he didn’t publish a book before he died,” Zeck said. “He did wacky pen-and-ink drawings with a mystic bent, not to everyone’s taste, but so off the beaten path, so unconventional, that they deserved an audience.” 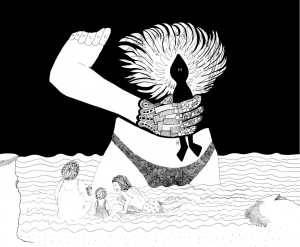 Gerry Zeck. “Sex Is the Root of Culture.”

Zeck added that as an elder, he has a wealth of experiences that may be beneficial for people to hear and share, and he hopes they do so over a lemonade or a beer.

“Because I can say things compactly and wittily, with some distance from the suffering or preening self, my poems may be of interest and even benefit to those who are grieving or rejoicing or simply wondering what it is to be human,” Zeck said.

Even in retirement, Zeck continues to write and is planning on publishing a second collection of poems from his time in Minnesota from 1990-2010, and a third collection from 2011 on after he and wife moved to Northwest Arkansas. Zeck said though he’s made something of being a freelance business writer, he continues to write poetry as an escape from the world of money.

“Why would you write, do serious writing, if you weren’t pressed or felt no pressure? I continue to write and pursue the big themes: life, death, love, lust, waning powers, and sustaining joys.”