Arkansas PBS won three regional Emmy Awards from the Mid-America Chapter of the National Academy of Television Arts and Sciences (NATAS) Saturday, Nov. 21, from eight total nominations this year. The six nominated productions, including the three winners, are available in a new playlist on the Arkansas PBS YouTube channel.

“It is an honor to be recognized for telling the rich stories from our great state,” Arkansas PBS CEO Courtney Pledger said. “These Emmy Awards represent the passion and dedication of our staff and the amazing work they do every day. Congratulations to all who contributed to these winning productions. Our work is a true team effort.”

“Men & Women of Distinction: Mike Beebe” won Director – Non-Live (Post-Produced). This film examines the life of the Honorable Mike Beebe, a product of Arkansas, born in a tar paper shack in Amagon. Beebe rose from his humble beginnings to practice law in Searcy and run for Arkansas Senate – where he was first elected in 1981 and served for 20 years – followed by successful runs for attorney general (2003-2007) and, finally, governor (2007-2015). Directed by Kathryn Tucker, “Men & Women of Distinction: Mike Beebe” was produced by Arkansas PBS and Kathryn Tucker with supervising producer Casey Sanders of Arkansas PBS and edited by Les Galusha of Galusha Creative LLC. The film was also nominated in the categories of Documentary – Historical and Editor – Program.

“As a fan of renowned Arkansan P. Allen Smith, it is an honor to share this Emmy win with his team and Arkansas PBS,” Burks said. 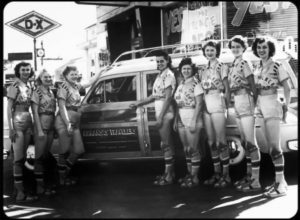 “I am honored to have been given the opportunity to help tell an often overlooked part of Arkansas history,” White said. “Because there is not a lot of footage available of Hazel Walker and her Arkansas Travelers, hand drawn animation became a necessary tool to help convey their fun and tenacity.

“Thank you to former Arkansas Traveler Francis Garroutte and writer Gary Newton for sharing their stories with us and all of Arkansas.”

The NATAS Mid-America chapter, which includes television markets primarily in Arkansas, Illinois and Missouri, was chartered in 1962 and began honoring outstanding achievement in this region with local Emmy awards in 1976. The organization’s mission is to encourage excellence in the television community.