The Inner Party is a force to be reckoned with.  Hailing from Fayetteville, AR, they play a teeth grinding, pulse pounding form of post-punk that blends the Pixies with Queens of the Stone Age and many other bands you can’t quite put your finger on, but know you love.

Formerly established by singer/guitarist Keith Miller and bassist Dave Morris in 2007, the Inner Party released their debut EP Honky Heretics, which received praise from Arkansas media. After performing regionally in 2008 and 2009 to support the album, the band entered into a lengthy hiatus while Miller and Morris pursued other interests.  The band resumed full time live performances in late 2011, with new members Jimmy Holloway (guitar) and Ezra Quinn (drums).

Having shared the stage with everyone from Lucero to Ashtray Babyhead to The SEE, the Inner Party puts on a hell of a live show.  Their on-stage prowess led to a phenomenal opportunity in June 2012. The band won free recording time at East Hall Recording Studio, where they laid down tracks for their latest EP, Degenerate Era with Chris Moore (Thunderlizards, Pagiins).  After raising over $2,000 via Kickstarter, the Inner Party self-released the record on October 9, 2012.

According to Morris, Kickstarter allowed them the opportunity to involve their fan base while obtaining third-party legitimacy.

“Any idiot with money can pay to have some CDs pressed, but it’s a lot trickier to put out a record relying solely on the support of your audience,” he said. “Doing it via Kickstarter legitimized it in a (small) way since lots of ‘real’ bands do it like that now and many bands try and fail to do it that way.  So, in addition to being happy that we had the money for a proper release, it also feels like we really achieved something by succeeding with our Kickstarter campaign.”

Describing the experience as stressful, educational and rewarding, Morris stated the hardest part of the campaign was the fine line that one must walk when asking friends for money.

“I’m sure I personally probably alienated a few people during our Kickstarter [campaign],” said Morris. “I am extremely grateful and thankful that we pulled it off, and honestly a little bit surprised. [U]ntil we actually surpassed our goal, we operated under a ‘do or die’ mentality, like we weren’t going to make it unless we just pushed as hard as we could.”

Degenerate Era is a step in a different direction for The Inner Party. For starters, having access to studio time versus recording on computers allowed them to develop their sound more in a manner cohesive to the stage.  Moore, the owner of East Hall Recording Studio, engineered the album. This was the first time they had recorded with someone outside of the band.  Also, Miller and Morris collaborated with band members to write the new songs while the tracks from Honky Heretics had mostly been leftover from Miller’s previous band. 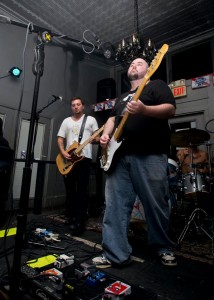 Morris added, “Stylistically the songs are farther away from punk; most of them are longer/more complex, etc.  It’s really just an all around evolution.”

Poverty is the greatest influence on the album according to Morris. He cited social and economic inequality as the primary theme on the record, which is rooted in protest songs.

“I love subtlety in art, but I feel like right now a lot of people really need to be hit over the head with a few basic ideas,” he said. “Mitt Romney really epitomized almost everything that we stand against, and I would like to think that his decisive loss in the Presidential election means that there are a lot of people that feel the way we do.  I guess trying to connect with those people through music is a big part of what drove the writing, and obviously just trying to express those feelings of frustration and desperation was the most important part. I don’t want for people to think of us as some one dimensional political band, but this EP does contain a pretty concentrated dose of political discontent and social unrest and there is more where that came from.”

In the future, The Inner Party wants to release a few singles, record a full-length album and tour. Morris is cautious, but optimistic about their chances at pulling this off.

“We have high hopes and big plans,” he said. “Of course all of those things require ever elusive money, so we might not accomplish any of those goals.  We sure as hell are gonna try.  A lot of people we know think it’s absurd to have ambitions like that nowadays, but we still want to try to ‘make it’ and have this be all we do for a living.  We’ve all tried other things and of course we all have ‘real’ jobs, but I think for all of us this is the big thing.  This is all I personally am ever going to be happy doing, so I have to figure out a way to keep it going.  I don’t think there’s much point in being in a band if you’re not playing shows, writing music, and releasing it out into the world.”

Elijah Mathis sees the world from a different perspective