Mark Hogencamp is a name that I will remember for the rest of my life. Now, I’ve seen a lot of documentaries, and I couldn’t tell you the name of a single soul in any of them. Unless, of course, it was a documentary about filmmakers, movie stars, cinematographers, etc. But this particular doc, entitled Marwencol, directed by Jeff Mar=lmberg, is based on an ordinary man and it introduced me to an individual so unique that it will be impossible for me to forget him. Now that’s an important word in this film. Forget.

On the evening of April 8, 2000, in Kingston, KY, Hogancamp was attacked outside of a bar by five men. They beat him as close to death as a person could be beaten. He awoke nine days later in a hospital, and spent another 40 days relearning everything from walking, eating, and talking all at 38 years old. Along his painful journey to recovery, he realized that he couldn’t remember who he or anyone around him was. Every memory he ever had was punched and kicked and beaten out of him. So what does he do since he can’t afford to have therapy?

He makes his own. 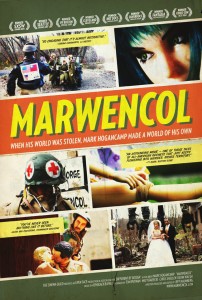 Mark created in his backyard an entire miniature town he calls “Marwencol”, where he recreates old and new memories with 1/6 scale inch dolls. Now, as crazy and creepy as that sounds, if you were shunned by society because you had brain damage, and only a handful of friends who couldn’t professionally help you, you would at least try something as out there as Mark did. I know I would. These dolls are designed to represent his friends, and the people he loves. They even resemble the people in his life. He found out through pictures and old home videos, that the person he was before he was “reborn” was in the navy, an alcoholic, divorced and had spent some time in jail. Finding something like that out with no recollection, but in bits and pieces slowly coming back like still frames, has to be one of the hardest things a person could ever go through.

Now living with no desire to even taste alcohol, he works at a small diner in his hometown that sells liquor, but Mark has no memory of ever being addicted to it. So he looks at it as someone who’s never had alcohol would look at it and say, “I have no interest in it.” The only thing he drinks now is coffee. And lots of it.

So with these World War 2 and Barbie Dolls, he makes up stories between them. His alter ego doll sits in his homemade miniature bar, built from plywood, and drinks only coffee, just like Mark does in reality now. The men adore the women, and the men kill off Nazis as they try to come into town asking for trouble. Couples get married in front of slain and hanged Nazis, nude women bathe in a creek, there’s a green haired woman in love with Mark’s alter ego doll and even saves him using a time machine that Mark put together from a torn up VCR that ate up one of his favorite porno tapes.  Many scenarios play out in Mark’s head. One story in particular, shows the reenactment of the night he was changed forever. Only in this town, the Nazis kidnap his alter ego doll and beat him mercilessly. By the end, he is rescued by all of the Barbie dolls of Marwencol. It’s played out really well when Mark is telling the story while we see pictures of the dolls posed in what looks like scenes from a movie.

This film asks an amazing question in Mark’s case; “What if your therapy became art?” He didn’t want to be an artist. All he was doing with this town was creating a world he felt safe in. Where soldiers from all over the world come together and drink and party with each other, while the women perform staged cat fights to entertain them. Mark said in the film, “Women rule the world. We’re just here to keep them company.”

It’s really hard to say a whole lot about this documentary because there’s a couple surprises I don’t want to spoil for anyone. I will say that it’s got some hilariously awkward scenes in it, especially one where even the filmmaker, Jeff Malmberg, was a little speechless to discover something about Mark that you don’t see coming. I would say this is one of my favorite movies. And I recommend that everyone find it and watch and see the delightful world that was created just to help get a man through the rest of his life. He’s living proof that ART is and always will be good therapy.

View the trailer here.  Read an interview with the director at PBS.org.

Jam Messengers bring their brand of trash blues to Arkansas