Our friends at Subtopian Magazine in Portland, OR, have recently launched a Kickstarter campaign on behalf of their small press to publish a collection of short stories and poems entitled Some Kind of Monster by Kirby Light, who writes a column for the magazine called “Pearls for Swine.” He’s been writing on and off for the last 10 years, being published in places such as From the Depths, Taproot Magazine, The Advocate, Soul Fountain, Foliate Oak Online, Chanterelle’s Notebook, and several other places. Recently, The Idle Class chatted with Light about his writing and the upcoming collection of his works:

The Idle Class: How long have you been writing fiction and poetry?

KL:  I’ve been writing fiction since I was about sixteen, well, writing short stories in the sense of literature, although that early stuff could never be classified as such. Looking back on my life I’ve always had a vivid imagination and as a kid I had been a good liar. Staring down the barrel of that gun known as time it sort of makes sense now that I would choose to write.

I grew up hearing stories, that’s one thing that can be said of my family, we told stories. My grandmother used to tell me this one story over and over again about the ghost of a man who had a golden arm and stalk a house looking for it. My father told stories and my mother also. My mother incidentally wanted to be a writer but never saw that dream through (she was a huge fan of Stephen King, owns a first edition hard back of his books—I’m not a major fan of King myself, but it’s from my mother that I get my love of words). 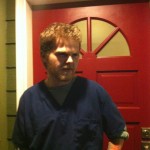 As I got older I read comic books and from there I drew comics and came up with stories. As I hit my teen years I just started to write stories on a type writer (we didn’t get our first computer until maybe 2003, which at the time was much behind the rest of the world). I consider writing as a possible career until I read the first three Hannibal books and then the excessively awesome book The Beach by Alex Garland. After that I found myself not only writing for the joy of it but trying (in my free time) to learn any and every thing I could about fiction.

And as for poetry, well, I’ve only been writing that for a couple of years now. I suppose there were a lot of reasons why I started writing poetry but the main reason is the same reason why I started finally taking my writing seriously. I met a girl. I really liked her. She paid me to write some extra credit college papers for her and one day I sat writing it in my college computer lab. It was some chemistry thing about what, nothing special, but I got playful and wordy with the title and liked what I had done. So I wrote my first real poem right there and then, thinking of this girl that I liked. It was called “Just a Ditty” and its in Some Kind of Monster. I believe it also got published online somewhere, although I can’t quite remember. It’s been a while.

The Idle Class:  How did you get hooked up with Subtopian?

KL:  Do you know those Christmas trees that they put up in like hospitals or sometimes at the grocery store, the ones with the tags on them that list some sort of item and it says, this gift will go to a needy family? Do you know what I’m talking about? Well, one year my family was one of those families.

That, of course, has no direct relation to how I ended up with Subtopian. My point is that I am poor. I come from a poor family, a long line of poor people. Sometimes I work two jobs, sometimes I do work for my neighbors, or work extra shifts at my job, or sell anything I have that might bring in a little cash to make the old ends meet. Well it was during one of those periods of times when I was selling some of my stuff that I discovered Subtopian. I was on Craig’s List posting some of my old stuff, a few old video games, books, some magic cards I had when I was younger, not a whole lot but stuff I had at the back of the closet from eons ago.

Well, in the period of posting this stuff on Craig’s List I checked their writing gigs section and came across [editor Trevor Richardson’s] post for Subtopian (the writing gigs section on Craig’s list worked for me once before. I got a reporter gig for a small northeast Portland newspaper from it. I went on one assignment for the paper, out to the water house. I did a miserable job, wrote a miserable article, was told to check out the Oregonian’s article on the water house and take information from their and spruce up my article with it. The pay to time spent ratio was incredibly lopsided and being told to basically plagiarize I decided to quit). Sorry that was a long side note. Anyhow, I found Trevor’s article on Craig’s List. He wasn’t offering any money but was looking for columnists and I found his ad intriguing enough to respond.

Having a bitter taste in my mouth from my previous gig off of Craig’s List I responded to the Subtopian ad with an over abundance of bravado. I typed out an email with the attitude that it probably wouldn’t turn into anything, which in the end, I guess worked in my favor because it gave me enough confidence to be myself (Trevor even mentioned in his response that I sounded really confident about what I was talking about). I was welcomed aboard right on the spot. There was a slight misunderstanding after that—as I said before, I was cautious of the writing gig posts on Craig’s list—but that was ironed out and I’ve been writing for Subtopian ever since. And it’s been great.

The Idle Class:  I’ve read “Pearls for Swine” a few times, but how would you describe it to our readers?

KL:  “Pearls for Swine” is a reflecting pool.  I will show you yourself by showing you me. After all, everyone is the same. Sometimes people forget and it’s good to be reminded. I need to be reminded constantly.

Originally it was going to be an article where I just talk about my opinions on certain topics and for the first few articles it was. But things changed. I started writing about myself. I had never written non-fiction before and it’s not something that I read. I tend not to like. But I needed to some up with something every month, so I just busted out stuff from my life. It’s the most honest writing I’ve done. Sure a little of myself and my life comes through in my fiction and certainly more in my poetry, but in the pearls articles it’s on full stream. Sometimes it is funny or it is sad or (hopefully) it makes you think. But I hope that readers are entertained and maybe learn something about themselves by learning something about me. I share my joy or pain and hopefully it makes them not feel alone or they get to feel some of the joy I feel or maybe they will remember a love affair if I tell them about one that I have.

The Idle Class:  How did you get Trevor on board with the Kickstarter Campaign?

KL:  I’d say I didn’t get him onboard as much as he jumped aboard and started rowing. I had asked about publishing some chapbooks (I’ve been looking to publish chapbooks for the last year) and we just started talking about prices and ISBNs and getting Subtopian magazine into print (the conversation went in many directions). Looking back it all sort of happened really fast. But, long story short, Trevor’s tremendously supportive. He was with it from the get go (It’s like I’m Rocky and he’s Mickey standing in my corner telling me I’m going to eat thunder and crap lightning).

Some Kind of Monster will be published under the Subtopian Press banner, so there will be some benefit to Subtopian. It will be a small step in further legitimizing Subtopian as a small press and it will bring a little attention to the magazine and the many writers it publishes.

The Idle Class:  Where will the book be distributed at?

KL:  That is a good question. One of the most interesting things about this whole venture is that it’s new. It’s a fly by the seat of our pants type situation. I’m learning a lot of this stuff as I go along. It’s likely it will that Some Kind of Monster will be available for sale on Amazon and as an Ebook. At Powell’s City of Books here in Portland there is a section for small press and self-published books and I’m probably going to try to get it in there. After that it’s all “we’ll see when we get there.” It sort of makes it very much like an adventure.

The Idle Class: What are your future plans for your writing?

Well, I just finished the second draft of my novel and I’m going to let that sit for a bit and come back to it with fresh eyes in the future. I’m also working on another novel in the meantime. Don’t know what I’m going to do with that just yet. I’m working on “Pearls for Swine” (I’d like to publish the articles as a collection with Subtopian in the future). I’m working on the poetry (I’ve decided I want to be the Francis Bacon of poetry, but that’s something I’ll let others figure that out on their own). I also work on short stories, send manuscripts to small mags, look for a little attention, and hope.

The Idle Class:  Is there anything else you’d like to add?

Yes. For anyone who is curious, the title “Some Kind of a Monster” is a reference to the act of writing, or pursuing anything you have a passion for. I don’t wish to explain it, because I’d hate to fully spoil the mystery. But I’ll just say this, never bet the devil your head. He’ll just make you a writer, and then you’ll lose it.

A Brief Interview with Cory Branan