The six musicians in Don’t Stop Please are very talented. They write very good songs. They play very good shows. However, many a Little Rock band has been in their shoes, I’m sure of it. The pratfalls of the music industry prove to be too difficult for many a bar band – it seems that too many of them must have been at work when the A&R guys from Columbia Records dropped by their house, so they’re still hanging around, filled with townie bitterness about the fact that the Lucky Break they were entitled to was never dropped in their lap.

The five guys and one girl in Don’t Stop Please have a different approach. Though they look like a crowd of kids you just caught smoking in a van after school before jazz band practice, they’re the hardest-working musicians I’ve ever encountered. They have the drive and motivations to drag their asses all around Arkansas, Missouri and Kansas playing shows, and the hard work shows in their music and live show, but not on their faces. They relish every moment onstage. 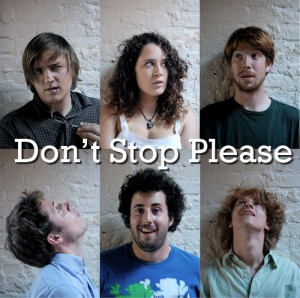 The band just released an EP Crowded Car. The release show attracted a bigger crowd than Titus Andronicus or Blitzen Trapper did in Little Rock (whatever…). The EP is music for music’s sake, with little or no concession made in the name of coolness. It’s a mess of sax, upright bass, horns, cello, nasty blues guitar and funky organ sounds, stitched together tight with pop songwriting that’s as much Neil Young as it is Stevie Wonder. They make this work with an almost galling transparency. They have no time for putting on airs – they’re too busy booking shows.

Hot off a string of shows promoting their new EP, I caught up with 1/3 of Don’t Stop Please. One rainy evening I went over to their home and studio where 2/3 of them reside. I found Robert Gaiser (who goes by “Bob” or “Gaiser” mostly) working on what he calls “trash pop” a la Lana Del Rey, working out a melody on the upright piano in the living room before moving into the converted sunroom where the “booth” end of their studio is set up to work on some drum sequencing in ProTools.

I found William Krzseszinski (who goes by “Willie” most of the time) in his room, playing video games (while Bob plays “Video Games” by Lana Del Rey over the studio monitors) and listening to “Fear of Music” by Talking Heads. Gaiser and Willie both play with bandmate Will King in a side-project called Comfortable Brother, while Joel, Nick and Anna play in a separate project called Handmade Moments.

The Idle Class sat down in the sunroom to talk about what’s been going on with Don’t Stop Please.

THE IDLE CLASS: You guys work your asses off.

BOB: I take a great deal of time these days to work on music outside of the band.

THE IDLE CLASS: You guys are aggressive with booking and that sort of stuff.

WILLIE: We have been. We’re trying to mellow out for the next few months and make it so that we can record this new album, because we finally got all the shit we need in order to record the damn thing. After that, we’re not really sure what we’re gonna do. I hope that a really good plan will just materialize.

BOB: After we get the album done?

BOB: I think we just take a month or so chillout time –

WILLIE: – for everybody to get jobs they’re gonna quit –

THE IDLE CLASS: Look for another place to settle down?

WILLIE: Maybe. It’s weird thinking about moving. I was just listening to [Talking Heads’] “Fear of Music” and that song “Find myself a city / find myself a city to live in / good points / bad points” – it’s weird to think that… I honestly don’t think that we’ll get out of Conway until a major business offer or a deal, something like that happens. It’s gonna take like a manager or a record label saying “We’ve got your back – go here.” For now, we can make our money here. I’d love to live in a city, it’s just one of those things – relocation for six people simultaneously, it’s kind of a big deal.

THE IDLE CLASS: Touring is going to be your biggest moneymaker, and you can go on tour from anywhere.

WILLIE: Selling records doesn’t make money for people. I mean, if we’re really lucky, we’ll see great success with this next album… but, you know, there’s a guy here in town, Joseph [Rowland] who works at AETN, and he’s in a band [Pallbearer] that is just now starting to reap the benefits of their record that they put out two years ago. And so we can’t expect an instant payout. And that’s something that’s gonna be difficult for us.

THE IDLE CLASS: You guys have such a strength as a live band. I mean, I’m blown away by the EP, too. What do you see as more rewarding – having something recorded that you’re proud of, or…

BOB: In the moment, I enjoy playing a live show more, because it’s more immediate. I can look at someone smiling in the crowd. But whereas I find the actual recording process very sluggish. “Oh we gotta fix that. Where’s that noise coming from?” But once it’s done, I’m more proud of the recorded product than I am of having played a good show.

WILLIE: To me, I really appreciate the challenge of recording, because it’s like, even though you know you’re gonna run into shit – noises and whatnot – to me, it’s building something tangible. You can have a good show or a bad show, but if you’ve got a good recording, it’s always a good recording.

I really enjoy finding an album by a band that makes me think “oh shit, man, this is it!” and I can keep listening to it going “holy shit, now I understand what this is all about!” especially when I can listen to it the whole way through and appreciate every track. To me, that’s phenomenal, and then when I have an opportunity to see a live band that makes seeing the band so much more enjoyable.

To me, a live show is just a big fuckin’ hassle. There’s a lot of stress involved with setting everything up and wondering if the sound guy is any good. I do enjoy them, but I enjoy recording a hell of a lot more. I think everyone in the band feels a little differently about it, but we all agree that we enjoy doing both those things. Nick and Joel have great banter. They say some funny shit.

THE IDLE CLASS: Does a bad crowd really suck it out of you?

WK: Yeah, they can. But sometimes…

BOB: – Sometimes it’s better for you, though.

WILLIE: If you have hardly anybody there, then at first, for me, it’s always kind of distressing, and then after a few songs, something clicks in my brain and I go “oh, fuck this shit” and then we just start kickin’ ass, and I think everybody else does something pretty similar.

BOB: You’ve got so few people you’re just like “You guys gon’ get all of this!”

WILLIE: They start paying attention, because they realize this is what’s going on, there’s nothing else happening in this fuckin’ room. I’d say the worst thing about a bad crowd is whenever you have a crowd full of people and they don’t want to shut the fuck up.

BOB: We’ve played fundraisers where people are just mulling around, talking the whole time, and we play a song and no one says anything.

THE IDLE CLASS: That Stickyz show was awesome

WILLIE: That show was insane! I couldn’t believe that show. That’s the best crowd we’ve ever played for.

THE IDLE CLASS:  I saw what I believe was Don’t Stop Please at the Brick House in like, December 2010

WILLIE: Just the three of us? [Joel, Nick and Willie]

BOB That was a really good show – I was there!

WILLIE: It was crazy!

THE IDLE CLASS: People were going nuts – like eight bands played that night and I was drifting in and out of the garage, and I think I walked in the middle of that set like “what is going on??”

WILLIE: We didn’t even have a drummer! Everyone was just getting the fuck down! I was just like “This is cool?”

THE IDLE CLASS: You were playing “Wagon Wheel.”

WILLIE: Oh god… Yeah, we used to do that a lot.

THE IDLE CLASS: I mean that’s a guaranteed bring-the-house-down.

THE IDLE CLASS: It’s kind of a cheap shot.

WILLIE: It is a cheap shot!

THE IDLE CLASS: It’ll get the job done.

WILLIE: It’s a good song, or whatever, I’m just tired of hearing it! It’s like Skynyrd or something. Skynyrd’s fuckin’ good, but I don’t wanna hear it anymore.

WILLIE: We’re hoping that we take Crowded Car’s level of production and vibe and step it up yet another notch. Because we can.

Wandering out of a theater