Audra Mae don’t mess around. With her red hair, razor-sharp wit, and “backyard swagger,” she’s a force to be reckoned with. The Oklahoma-native recently released her second LP “Audra Mae and the Almighty Sound” on Side One Dummy Records. An acoustic blend of roots and pop with the best braggadocio this side of hip-hop, Mae’s music is gritty, clever, and infectious. You’ll find yourself uncontrollably humming the melody to tracks like “The Real Thing” and “Little Red Wagon,” or “Ne’er Do Wells” after a few spins. Her ad libs between verses can be inspiring. When she says, “kick it,” you want to…kick it, whatever it may be.

The great-great-niece of the legendary Judy Garland, being on stage came easily to Mae given her family’s history. Mae’s mother was a children’s theatre director who instilled a love of performing in her daughter at an early age. Mae even considered a move to New York to pursue a career on Broadway.

“I was just born a weirdo,” Mae said. “My memory was good as a kid.  I was a good mimic and could do impressions of people. I was onstage a lot and really into storytelling and doing different characters.  There was never a time in my life that I really decided to [perform].  I was already doing it.”

She attended Middle Tennessee State University for a year, planning to become a record producer. Finding herself uninspired by the monotony of college life, she decided to set off on her own to become a songwriter.

“It’s a strange thing,” said Mae. “I had been in theatre my whole life and sort of became less and less inspired by other people’s words. I’d always been an interpreter rather than a creator. But then I just stopped relating to other people’s work.”

Mae packed her bags and headed to Los Angeles to fight tooth and nail to break into the cutthroat music scene.  She got gigs at Genghis Cohen, Hotel Café and any other venue where she could get her foot in the door. During this time, people began to take notice. A representative from Warner/Chappel Music came to her shows for eight months straight and tried to sign her to a publishing deal. Mae didn’t feel ready yet, but eventually she felt her writing had matured. She signed with the company in 2006. The deal opened a lot of doors for collaborations and song placement on Sons of Anarchy and in the Judd Apatow film The Seven Year Engagement. She even had an album cut on Susan’ Boyle’s multi-platinum debut. Whether penning a tune for herself or someone else, Mae finds that no matter the genre or the sound, songwriting is the same.

“It’s all just storytelling,” Mae said. “If you tell a simple story or a fable or something, you set stage however you want and with whatever colors or moods you want. From a songwriting perspective, if I can get in the mindset of the artist and give them something to say that they haven’t said yet. [Professional songwriting]  is such a numbers game.  You keep writing because it’s fun. Sometimes [an artist] picks it and you’re surprised when they do. You juts have try to enjoy yourself and be grateful it’s your job.”

A few years after signing her Warner/Chappell deal, Chuck Ragan, former lead singer of Hot Water Music, visited Mae’s Myspace page upon a friend’s recommendation. He recruited her for the Revival Tour. Mae had never been on the road before. It was a major career move, which led to her being signed by L.A.-based Side One Dummy Records, which released her debut LP “The Happiest Lamb” in 2010.

“Side One Dummy had been coming to my shows some, but Chuck sort of pushed them over the edge,” said Mae.

Mae found touring to be an eye opener.

“The culture backstage with other musicians is that we all get along well with each other and respect each other,” said Mae. “When it comes to groupies that can be a bummer. You’re seen as equal but at same time you see how they treat other [women].  It’s just a weird lesson to learn how not to judge people like that.  Guys have so much pressure to be rock stars and not care how they treat people. People can be the most brilliant artist and write songs about love, but off-stage can be really horrible.”

She cited her recent tour with Cory Branan to be one of her favorite outings on the road due to Branan’s talent and  character. 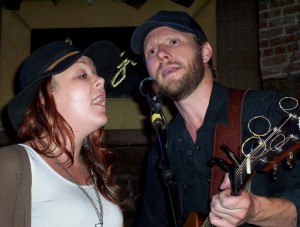 Performing live is one of Mae’s greatest passions.  She enjoys the emotions involved and the spontaneity.

“What dictates your mindset is feeling out your audience,” said Mae. “You can take them wherever you want to go. It’s just an emotional rollercoaster. A lot of times people are drunk.  They will feel things 10 times deeper.  If you play something sad, they may relate to you in a sad way and you’ll put them in a bummer mindset, so you want to bring them out of that. Unless they aren’t listening, then do whatever the hell you want.”

Being a female singer/songwriter has its upsides and downsides according to Mae.

“Luckily I’m in a side of music that doesn’t care about appearances so I can express myself visually however I want,” said Mae.  “That’s been freeing for me. Usually onstage, if you’re a girl with guitar, people assume you suck.  That’s worked out to may advantage.  You have element of surprise up your sleeve.  Winning them over is not really a challenge once I open my mouth.”

Learn more about Mae at www.audramaemusic.com.

Kara Bibb: In Her Words