Ubuntu—Because we are, I am.  (Zulu origin).

Lenore Norrgard is on a mission to make a movie.  She has been working on the story for American Ubuntu for nearly a decade.  After moving it through the early stages of pre-production, Lenore decided to take it to the people by launching a Kickstarter campaign to raise the funds for the film.

She describes American Ubuntu as her response to September 11 and the events that followed.

On her Kickstarter page, Lenore said, “I was driving through the foothills of Mount Shasta in northern California passing through the sacred landscape, accompanied only by the saber-rattling AM radio, [which] was surreal,” she said. “Relieved that the bridges into San Francisco had survived the day intact, I got home and curled up on a futon for the next few days, asking myself, ‘How do I respond to this — as a film maker, as a citizen, and as a healer?’ [American Ubuntu] shows how we can dissolve the polarizations we face today, and come into an ubuntu state of mind.”

As the question ruminated in her mind, the characters began to take shape.  She could envision their longing for love, clashing worldviews, and impossible situation, all of which slowly wove together to craft the film’s plot. 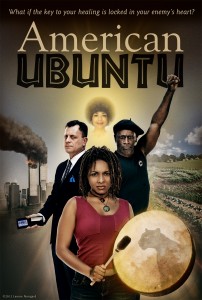 According to Lenore, the word “Ubuntu” is commonly used in Africa to express the interconnection of different peoples and the film explores this theme from an American perspective “through the difficult but essential connections among its conflicting characters.”

She gave the following synopsis to The Idle Class:

American Ubuntu is a father-daughter love story. A spiritual-political thriller. A blended family drama. All rolled into one. It’s satisfyingly complex — like real life.

The story begins in the summer of 2001. The main characters are: A white Army veteran, who now works for the FBI; his long lost, high school sweetheart, who was black, and has been dead for 20 years; their adult daughter, who lost her mother as a little kid, and doesn’t know her birth father; her devoted stepfather, a Black Panther, who is guardian of hearth and home; and finally, the community of Ubuntu — founded by the mother and stepfather and other social visionaries, twenty years ago — where the daughter grows up.

Near the beginning of the story, the attacks of September 11 take place, and each character has a very different response to the tragedies: The birth father is responsible for finding possible suspects and protecting the USA. The daughter wants to give refuge to innocent Muslims under attack on the street. The stepfather is the guardian of the Ubuntu community, and doesn’t want to put it at risk by housing potential suspects. And the mother, from the Ancestral realm, has a hand in each of their lives…

One of the primary themes of the film is “What is security and how do we find it?” Lenore focuses on a spiritual solution to such a contemporary problem.  In the story, the daughter is being groomed to be the next spiritual leader of the Ubuntu community.

“While the daughter certainly is a leader, and is willing to lead, she’s not willing to do it alone: One of the paradigm shifts in the story is to collective leadership,” Leonore said.

The Kickstarter campaign for American Ubuntu will end at noon on Wednesday, Dec. 12, 2012.  Currently, the project has over 200 backers and is almost halfway to its goal of $30,000.  If you would like to learn more and make a pledge, visit their page.

Elijah Mathis sees the world from a different perspective

ON THE STAGE: TheatreSquared presents "Period of Adjustment" by Tennessee Williams